While billions of dollars are being spent on blockchain, and that spending is expected to grow exponentially over the next five years, the distributed ledger technology will never spark a technology revolution in the enterprise where preference always favors centralized control.

“I don’t think we will ever see a revolution in the enterprise,” said Avivah Litan, a vice president of research at Gartner. “No one wants to give up authority. Think about it. It goes against an enterprise’s ability to control their own destiny. Full, complete blockchain is about no central authority. It’s just peer-to-peer.”

Litan was among analysts discussing tech trends shaping the future of IT and business at Gartner’s IT Symposium/Xpo 2019 this week. Among the hotter topics was blockchain, which currently is sliding into the “Trough of Disillusionment,” from which it won’t begin to emerge for at least another two years. 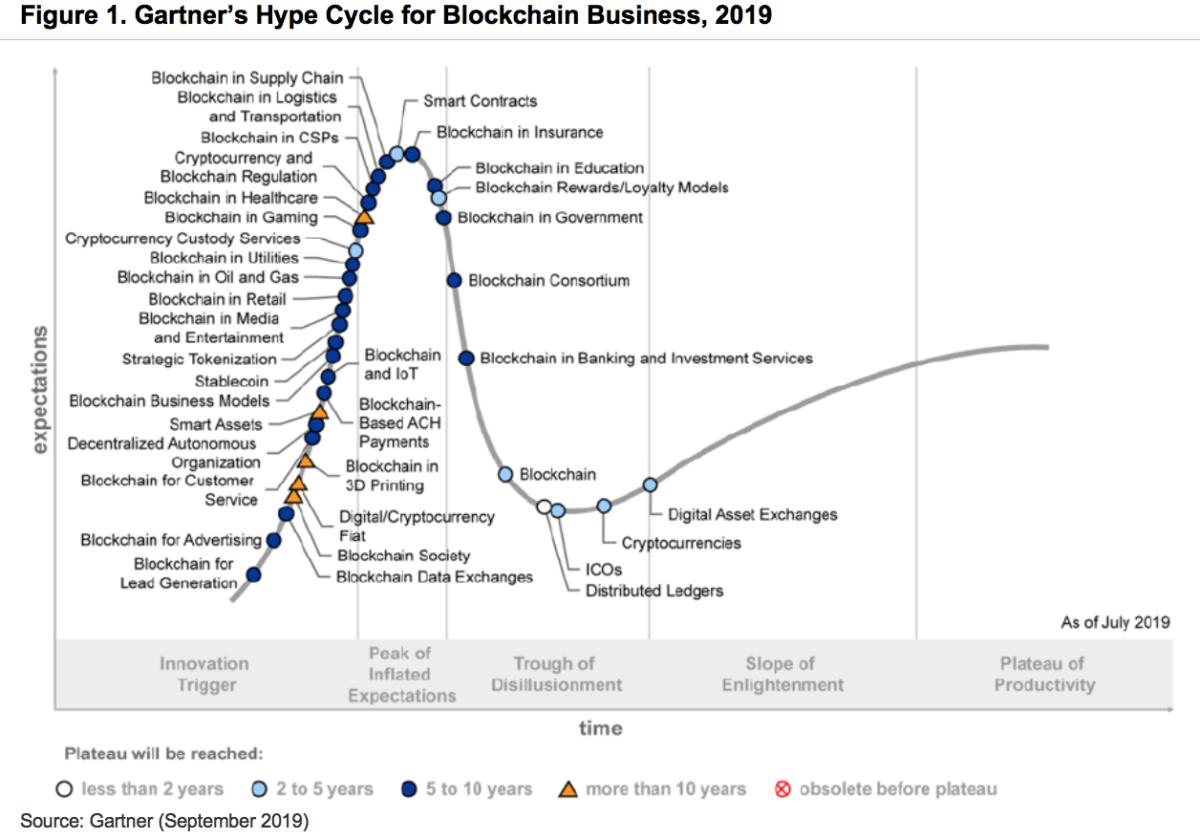 Still, enterprises are eagerly exploring blockchain, according to Gartner, because C-level executives and IT managers see it as something truly innovative. And they’re trying to figure out how to use it, regardless of whether they actually need it.

“We have come across many companies who really want to explore blockchain but don’t have appropriate use cases for it,” she said. “It’s hard to tell people they don’t have a real use case for it. The users don’t really understand what blockchain does or doesn’t do. They just know they want to use it.” 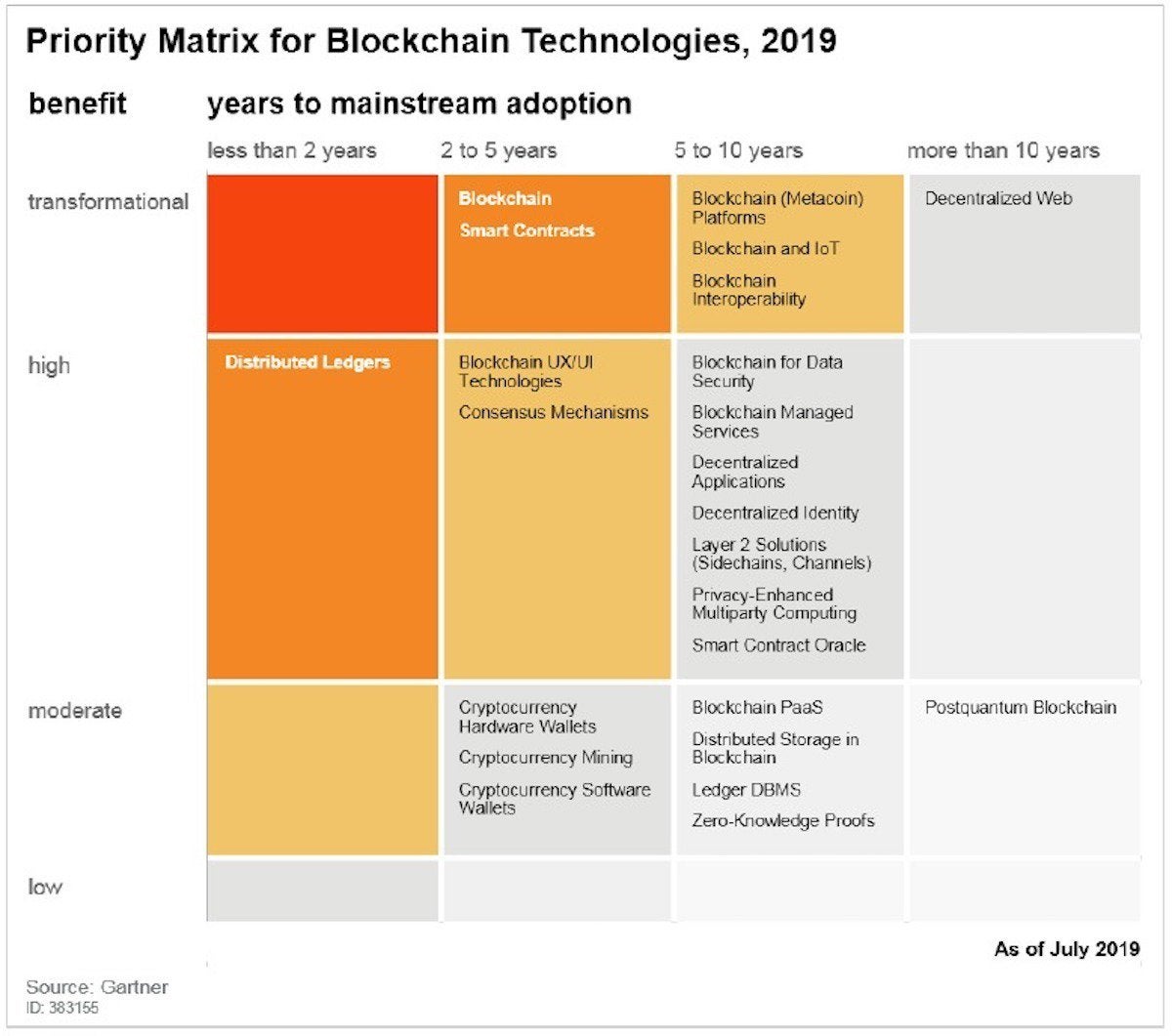 It will likely take another nine or so years before blockchain becomes fully scalable technically and operationally, according to Gartner. “Blockchain technologies have not yet lived up to the hype and most enterprise blockchain projects are stuck in experimentation mode,” Litan said.

By 2021, 90% of current enterprise blockchain platform implementations will require replacement within 18 months to remain competitive, secure and to avoid obsolescence, according to Gartner.

For blockchain to reach its potential as a distributed ledger for global business-to-business transactions, five things need to happen:

Private key management is seen as the Achilles’ heel of blockchain technology, Litan said, referring to the fact once a user loses their private key they no longer have access to the data, cryptocurrency or other assets connected to the latter.

A number of companies and consortiums are currently working to solve the private key problem as well as the scaling issue.

Managed services today include Chainstack, IBM’s blockchain cloud, and Mangrovia’s Blockchain Solutions. The services allow organizations that lack technical expertise and infrastructure to support their own blockchain applications running in the cloud.

Also key to blockchain’s success will be its evolution into a combination of a permissioned or private platform and an open, public ledger. That, Litan said, will enable enterprises to communicate privately and behind the scenes on a permissioned ledger, while also enabling a public-facing application that allows users to securely view transactions.

Hadera Hashgraph is one example of a “hybrid” distributed ledger. The startup is a competitor to both permissioned blockchains such as Hyperledger and public platforms (such as Hyperledger Fabric & Sawtooth, R3 Corda, and others) and their commercial providers, which include AWS, IBM, Microsoft, Oracle.

At its mainnet launch in August, the Hadera Hashgraph claimed it could outperform both public blockchains and traditional financial and business networks.

Hadera Hashgraph is very important. It’s not a blockchain, but a blockchain equivalent with a lot of investment from different parties that want a more scalable architecture.

“There is no direct equivalent to Hedera Hashgraph today,” said Martha Bennett, a principal analyst at Forrester Research. Hedera has garnered support from telecom players and tech vendors, even those that have their own blockchain services. Indian tech giant’s Tata Communications, IBM, Deutsche Telekom, and FIS Global, which acquired WorldPay earlier this year, are among 10 companies on Hedera’s governing council.

Another hurdle for blockchain is regulatory oversight, which has increased over the past year since social networks, such as Facebook, announced plans to create blockchain-based financial networks over which its Libra cryptocurrency can be exchanged or used for online purchases.

Multi-national regulatory pushback against Facebook’s move to create a cryptocurrency payment network is slowing the project and caused supporters such as Visa, Mastercard and PayPal to back away. Last week, PayPal announced it was pulling out of Facebook’s Libra Alliance, the governing counsel for the blockchain initiative.

“These companies are at the mercy of regulators,” Litan said. “They don’t want to annoy them or do anything against them. It just shows you how threatened governments are by cryptocurrency and by Facebook.”

By 2023, blockchain will be scalable technically, and will support trusted private transactions with the data confidentiality required, Gartner’s 2019 Hype Cycle for Blockchain Technologies forecasts.

“When the technology is scalable and easy to use and you just write your application and you don’t care about your backend, then you’ll see a digital transformation for use cases like track and trace… or cross-border payments – where no one’s in control,” Litan said.

XRP Accounts for Over 50% Of All Crypto Transactions in Last...